Tyler has a lot of machines. I don’t know what all of them do. I probably don’t know what half of them are called. But I do know that they are interesting and he loves restoring them and finding a use for these things that have rusted and become obsolete to other people.

I think what is so nice about these machines, is that like my treadle sewing machine, the older they are, the more classy they look.

A few years ago, Tyler purchased one such classy machine at an auction. It’s been sitting in our garage for a couple of years. Unable to be restored or be used. In fact, I couldn’t even really hardly see the thing bc the garage was so full of wood, and tools, and cords and stuff.

But after Tyler got the porch to a certain point (utilizing a lot of the cedar that was occupying the garage), he began to clear out the garage in order to move this machine (and another one) to his shop.

Which meant, I finally was able to see the machine in all its glory.

And it is glorious.

It’s from 1942 (or at least close thereabouts). And from the font in the dials, to the way the metal parts are rounded, to the grates, it’s all class.

It almost seems unreal. It’s so similar to the styling and shapes you see from cars of that era that it’s the kind of thing that makes a person smile. 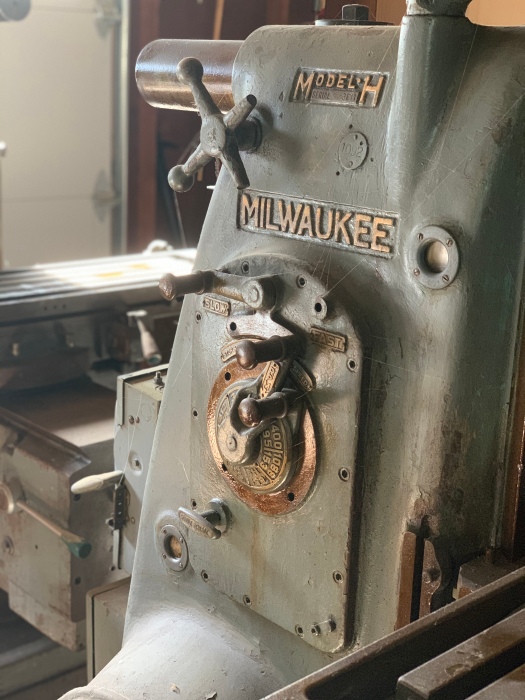 I’m sure, artistically-speaking, there is some way of describing the lines used in from this time period. But I don’t think you even have to know that much about history to feel the weight of a machine from that era. 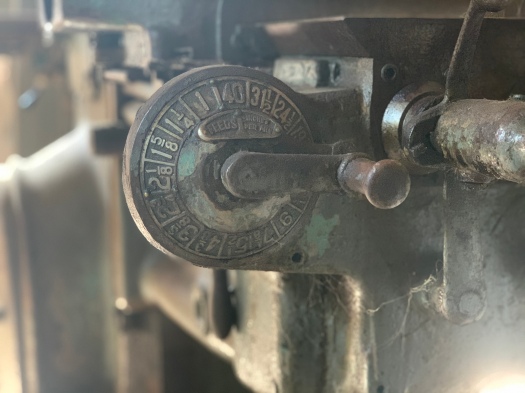 What kind of a machine is it, I hear you ask? I don’t recall every asking Tyler. Probably a milling machine? (Autocorrect totally changed this to “MILKING machine before it posted. Even after I edited this piece…how does autocorrect not know I use the word milling by now?) It works with metal (I’m pretty sure). But I don’t even care what kind it is. I don’t even think he needs to clean it up for it to continue to impress me with its artistry.

It’s my favorite machine he’s ever purchased…something that always makes me smile. And these days, that’s important stuff.

As a small bonus post script to this entry (as that was suppose to be the final sentence), Tyler told me this evening that when going through this machine he opened up the little door for the first time. And, inside, was a tag that read, “Property of the US War Department.” So…indeed…it is a WWII Veteran Machine. What intriguing news!