The excitement of when these posts will be published is a little overwhelming.

As it turns out, after much of the main work on the porch was done (in about five days) there was a gap in the process. This is because it was going to take a few weeks for the windows to show up. (And because Tyler had a continuing education class for part of one week).

This is why there has been a break in the porch posts (and why these posts are publishing a month behind actual real time construction/demolition).

Immediately after the rotting beams were taken down, Tyler began framing the the new porch wall with the windows. 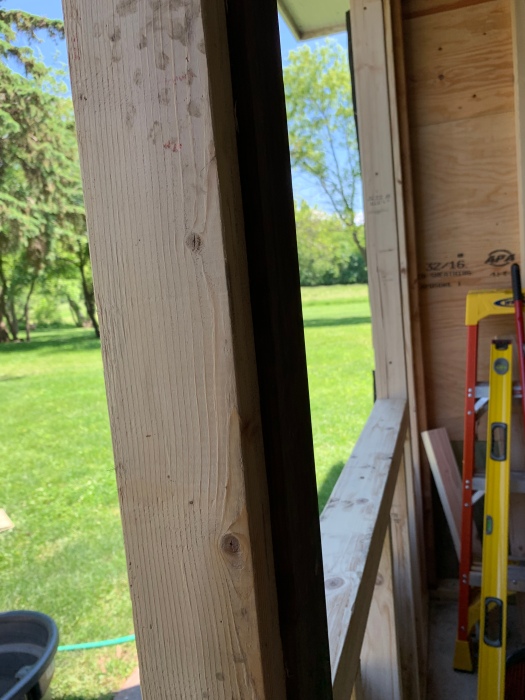 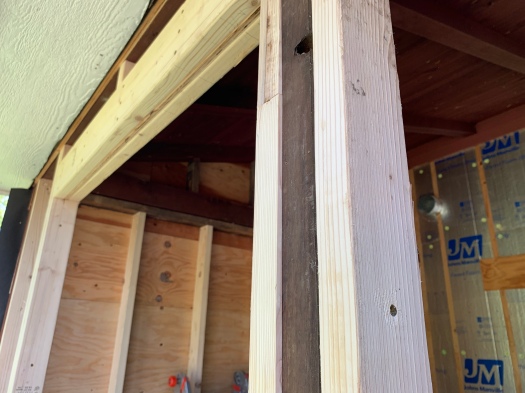 This involved some fancy math-not surprisingly-since the concrete pad the porch was built on is uneven, any new beams and the footing needed to be adjusted so the roof wouldn’t sag or be uneven.

This even meant that Tyler had to shave off parts of the old beams. I think shave is the wrong word entirely but….would sand work? That doesn’t sound intense enough. He also had a beam (see above) that was bowing out. Which involved fixing the beam by…making it less bowing? Geez Jenna-take some better notes!

So that needed to be done. Then he added kings, cripples, headers, and….shoot! I forgot one of the words! Those are all the different names for the wood pieces that frame windows and doors and such.

Gus was terribly confused about whether or not he was in some sort of window jail when he would be in the porch. That was hilarious.